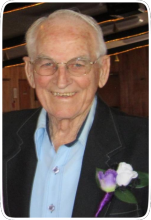 A celebration of life for longtime Lamar resident, Winnie Wilson was held at 10:00AM on Saturday April 23, 2016 at the Lamar Methodist Church with Barbara Johns-Schieicher officiating.

Winnie was born on November 21, 1926 at Liberal, Kansas to Dewey and Janet (Sutton) Wilson and passed away on April 14, 2016, with his family at his side, at the Weisbrod Memorial Hospital’s Extended Care Unit at the age of 89.
Winnie began life on the family farm in Liberal when he was delivered by a Doctor that traveled up to Liberal from the Oklahoma panhandle.  Growing up during the great depression, life was difficult for young Winnie, and he missed an entire year of school from an illness.  Winnie recovered, and often told stories of his experiences with the horses on the farm.  Winnie was drafted in early 1945 before WWII had ended and was sent to the Navy.  In the Navy, he was stationed out of San Francisco and was awarded the Philippines Campaign ribbon.
After he served his time in the Navy, Winnie returned to the family farm, which had moved to Sheridan Lake, CO.  In the late 40’s, Winnie met the love of his life, Myrna Pearcey, in Eads, CO, which was the social hub of Kiowa County at the time.  Winnie and Myrna eloped to Raton, NM on Sept 22, 1950, and started life in a little town east of Sheridan Lake, that only exists today as a sign on the railroad tracks, called Stewart, CO where Winnie worked on the railroad, then later in the grain elevator.
Winnie and Myrna found that they were unable to have children, so in the summer of 1957 they adopted an 11 month boy, Gaylen Allen Wilson.
In 1958 they moved with Gaylen to Lamar, CO, and Winnie began a 34-year carrier as manager at the west grain elevator in Lamar.
In 1961 they added a sweet two week old baby girl to the family when they were able to adopt Tamela (Tammy) Marlene Wilson.
Winnie was quite industrious all his life, having side jobs of Disc Sharpener, Hog Farmer, Wheat Farmer, and Cattle Rancher.
Winnie was also quite involved in the community, having been a past member of the Lamar Noon Lions club and a lifetime member of the Lamar Elks Lodge where he served a term as Exalted Ruler.  For many years, until his health wouldn’t allow him to, he was responsible for helping weigh all the livestock for the Prowers County Fair, and was a fixture serving iced tea at the fair barbeques.
Winnie lost his sweetie, Myrna, in 2007 and took it very hard, but was able to maintain his positive attitude.  He spent the later years of his life tending the yard at his house and following his Colorado Rockies closely.
Winnie was preceded in death by his much beloved wife Myrna (Pearcey), parents, and siblings Ian Wilson, Burl “Bud” Wilson, and Murl Burrows.
Winnie is survived by his siblings Ray (Lila) Wilson of Sterling, CO, Inez (Floyd) Haley of Corpus Christi, TX, Loretta (Art) Shepard of Helena, OK, Mary Vanderkooy of Aurora, CO, JD (Barbara) Wilson of Sheridan Lake, CO and Bobby (Pat) Wilson of Aliso Viejo, CA.
Winnie is also survived by his children, Gaylen (Heather) Wilson of Lamar and Tammy (Tim) Glover of Commerce City, CO, his grandchildren, Rachel (Chuck) Hamilton, Renelle (Craig) Fahey, Seth (Angela) Wilson, Rae (Greg) Clausen, Tanner Glover, and Troy Glover, his step-grandchildren, Dalton, Kaley, and Cierra Braaten, and his great granddaughter, Zoey Wilson.
Winnie is survived by dozens of nieces and nephews, and a multitude of friends and extended family.
To order memorial trees or send flowers to the family in memory of Winfred "Winnie" Wilson, please visit our flower store.