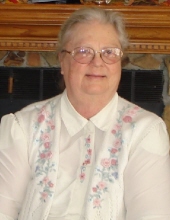 A celebration of life funeral service for longtime Lamar resident, Wilma Jean Sykes will be held at 10:00 AM Friday, August 23, 2019 at the Peacock Family Chapel with Eric Hahn, Darla Fisher, and Cindy Christian officiating. Burial will follow in the Fairmount Cemetery in Lamar.

Wilma Jean Sykes was born on November 17, 1939 in St. Francis, KS to Wilber Dean Barnhart and Elizabeth Jane Levin-Barnhart and departed this life unexpectedly on Sunday, August 18, 2019 at her home in Lamar at the age of 79.

Wilma was preceded in death by her parents, husband – Carl Sykes; Son – Troi Sykes; and one sister – Mary McPherson.

Wilma and Carl Sykes met when Carl's older brother Elmer was dating Wilma's cousin Barbara. They fell in love, eloped and were married in Raton, NM. To this union twins Allan and Darrell Sykes were born, while Carl and Wilma were living in Denver. The Sykes and their young sons moved to Matheson, CO. A few years later, Wilma and Carl were blessed with another son, Troi Graham. Shortly after Troi the family moved to Limon where Carl worked at the Limon Packing Plant. In 1981 their final move was to Lamar, Colorado where Carl worked for W.H.O. Manufacturing until his retirement.

Wilma worked as a care taker for the elderly in the Lamar area and was loved by the families she cared for. She had a strong faith in God and prayed daily for the needs of others. She had a huge heart, was kind to everyone and always thought the best of people and their situations.

As many of you know, Wilma lost her sight approximately 10 years ago but continued to enjoy visiting and helping others any way she could. After Carl's passing, Wilma insisted on living alone, as you also might know, when she made her mind up she could be stubborn. She felt safe and comfortable with her dog, Toby, and the watchful eye of her neighbors, friends, and family. Wilma loved to sit on her front porch under her beautiful shade tree that was planted by her dad many years ago. She loved Lamar and often said moving here was the best decision she and Carl ever made regarding a final place to live and settle down. Wilma's church family was important to her. She enjoyed attending church services whenever she could.

Wilma will be missed by her many friends and family but we draw comfort in knowing she is with her heavenly father today. She is asking a lot of questions (something she did her share of here on Earth) and carrying on some great conversations with her loved ones who have gone on before her.

Those desiring may make memorial contributions to the American Cancer Society or the American Diabetes Foundation either direct or in care of the funeral home office.
To order memorial trees or send flowers to the family in memory of Wilma Jean Sykes, please visit our flower store.