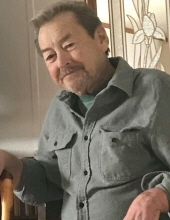 There will be no services for longtime Lamar resident, William A. Fagan affectionately known to his family and friends as Bill, per his request.

Billy was the beloved husband, father, grandfather, great-grandfather, uncle, and a friend to many. His life made a great impact on all that knew him. Billy worked for many years for W.H.O. Manufacturing in Lamar as a welder, also a few years as a mechanic for the City of Lamar. During those years Billy loved to go fishing with his children, both sons and daughters. His good friend Lester Eye was often with him as well. Billy also enjoyed helping another close friend, Fred Elliott, work on his demolition derby and racing cars. Billy’s family remembers him loving league bowling so much that when he ripped out a pair of jeans, he kept right on bowling; requesting another pair be brought to him. Billy took pride in having a manicured lawn wherever he lived. After Billy had his heart attack in 1994, he started doing mechanic work in his garage at home. He was always fair with whoever wanted their vehicle fixed, never overcharging for his work. Billy knew how to fix anything that broke down in the home, never needing a repair person. He handed that ability on to his five sons. If something didn’t work the way he thought it should, Billy would get frustrated and say, “Yep, that’s what I thought, Made in China!” Billy was such a responsible and caring person who always provided for his family with all they ever needed or wanted. In 1998 Billy moved to Raton, NM with Sandy and his youngest son, Trevon. There Billy worked as a mechanic for Ray’s Field Service. Billy retired in April 2009 and started enjoying his new hobby, making furniture and other things out of scrapped wood. Beautiful and unique pieces were made for his wife and children. Billy also helped his children and grandchildren make personal projects. Billy was dearly loved by his family and will be sorely missed!

Bill is preceded in death by his parents, his brothers, Edward Fagan and Tommy I. Fagan, sister, Mary Nave and granddaughter, Keagan Fagan (daughter of Trevon and Jordan Fagan).

Services are under the direction of the Peacock Family.
To order memorial trees or send flowers to the family in memory of William "Bill" Fagan, please visit our flower store.