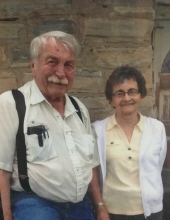 William “Everett” Smith
A celebration of life for longtime Lamar resident, Everett Smith will be held at 11:00AM on Tuesday, October 1, 2019 at the Lamar Christian Church with Ian Blacker officiating. Interment with full military honors will follow at the Fairmount Cemetery in Lamar under the auspices of the local V.F.W. and American Legion Posts.

Visitation for Everett will be held on Monday, September 30, 2019 from 5:00PM until 7:00PM at the Peacock Family Chapel.

William “Everett” Smith was born on January 7, 1933 at Brewster, Kansas to Harry and Cecil M. (Forbes) Smith. He attended school in Colby, Kansas graduating in 1950. He was united in marriage to Margaret Bogart in 1953 and to that union Rodney and Ronald were born. Shortly after their marriage Everett joined the United States Army. He served his country for two years.

Everett relocated to Lamar, Colorado in 1961 and managed Lamar Feed Yards for about 17 years. Everett enjoyed frequenting the local dance halls in town where he was introduced, by Melba Castle, to the beautiful lady who would become his beloved wife, Bonnie. They were married on April 20, 1973 and he became a very supportive and loving step-dad to Tom, Dinelle, David and Kathy. Bonnie recently said, “He loved me and he loved my babies”.

The family later moved into Lamar and Everett took a job for WHO Manufacturing, hauling tub grinders all over the country, until he retired. Bonnie and Everett enjoyed 46 years together.

They were the proud grandparents of eleven kids: Jessica, Troy, Michael, Chris, Tiffany, Andrea, Jamie, Michelle, Nathan, Willie and Aaron. They the great grands started arriving which total 32 at this time. “Papa Ev” loved all these kids with all his heart.

Everett passed away on Thursday, September 26, 2019 at the Memorial Hospital in Colorado Springs. He was a wonderful man who is very loved and will be missed greatly.

He is preceded in death by his first wife, Margaret Bogart Smith, his parents and his brother Jim Smith.

Everett is survived by his wife, Bonnie Smith of the family home in Lamar, children, Rod (Anna Gonzales) Smith of Solomon, KS; Ron (Vicky) Smith of Wichita, KS; Tom Lewis of Hasty, CO; Dinelle Byrd of Lamar; David (Vicki) Lewis of Lamar, and Kathy (Dennis) Cook of Beaver, OK; eleven grandchildren and thirty-two great-grandchildren. He is also survived by his step-brother as well as numerous nieces, nephews, other family and a host of friends.

Memorial contributions may be made to the Lamar Area Hospice either direct or in care of the funeral home office.
To order memorial trees or send flowers to the family in memory of William Everett Smith , please visit our flower store.