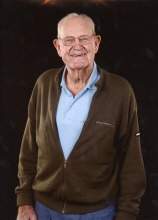 Wayne. Lubbers
A celebration of life for lifelong Lamar resident, Wayne Lubbers were held at 10:00AM on Saturday, October 1, 2016 at the Peacock Family Chapel with Reverend Rory Gillespie officiating. Interment followed in the Veteran’s Section of Fairmount Cemetery with full Military honors under the auspices of the local VFW and American Legion Posts.

Wayne was born on July 24, 1925 at Lamar, Colorado to Otto C. and May Esther (Morris) Lubbers and passed away on September 25, 2016 at the Sangre de Cristo Hospice House in Pueblo, Colorado at the age of 91.

He is preceded in death by his wife, Lorene Lubbers; his parents, brother, Robert C. Lubbers, brother-in-law, Charles Keith and sisters-in-law, Frankie Lee and Donna Lou.

Wayne is survived by his children, Deb (Bill) Elam; Doug (Kathy) Lubbers, Paula Wood all of Lamar and Barry Lubbers of Amarillo, TX; eight grandchildren and eight great-grandchildren. He is also survived by his sister, Lucy Dunham, as well as numerous nieces, nephews, cousins, other family and many friends.

Memorial contributions may be made to the Lamar Area Hospice and/or Sangre de Cristo Hospice either direct or in care of the funeral home office.
To order memorial trees or send flowers to the family in memory of Wayne Lubbers, please visit our flower store.