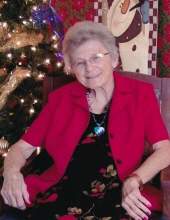 A graveside celebration of life for longtime Lamar resident, Wanda Wilson will be held at 2:30 PM, on Friday December 29, 2017 at the Walsh Cemetery in Walsh, Colorado with Pastor Jerry Ellis of the First Southern Baptist Church in Lamar officiating.

Visitation for Wanda will be held from 9:00 AM until 12:00 PM Noon on Friday at the First Southern Baptist Church in Lamar (706 W. Pearl).

Wanda was born on December 29, 1934 at Elkhart, Kansas to Dwayne Virgil and Madge May (Geisinger) James and passed away on December 20, 2017 at the Lamar Estates Nursing Home at the age of 82.

She is preceded in death by her husband, Roy Wilson, son Larry Russell Mendenhall; by her parents, and by one grandson Russell Birt.

Memorial contributions may be made to the Denver Rescue Mission either direct or in care of the funeral home office.
To order memorial trees or send flowers to the family in memory of Wanda Ann Wilson, please visit our flower store.