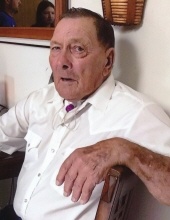 A graveside memorial service for lifelong Lamar resident, Vernon W. Carter will be held at 10:00 AM, Tuesday, February 11, 2010 at the Wiley Cemetery with Reverend Darren Stroh of the Lamar First Baptist Church officiating.
Vernon was born in Lamar, Colorado on November 7, 1935 to Walter and Bessie (Andersen) Carter and passed away at his home on February 5, 2020 at the age of 84.
Vernon graduated from Lamar Union High School with the class of 1955. He married Romona “Boby” Matthews and to this union two children were born; Jeany Sue and Guy.
Vernon was preceded in death by his parents Walter and Bessie Carter; mother and father-in-law, Guy and Imogene Matthews; his first wife Romona “Boby”; daughter Jeany Sanders; daughter-in-law, LeAnne Carter; brother Buddy Carter; his nephews Terry Carter, Rodney Carter, Steve Haggard, Ronnie Haggard and brother-in-law Ronald Haggard.
He is survived by his wife Patricia Carter of the family home, son Guy (Tina Musick) Carter of Lamar; Three grandsons, Nicholas (Bryana) Carter of Lamar, David (Laura) Sanders and Lyle (Christie) Carter both of Amarillo, TX and one granddaughter Nicole of Lamar. Four great grandchildren; Cooper, Isaac, Carson and Joyce. He is also survived by three step grandchildren; Jacob, Julie and Hailey as well as his sister Larreen Haggard, sister-in-law Nadine Carter, four nieces, one nephew other relatives and many friends.
Vernon worked 12 and half years for DeMarto/Horace/Gana Grain Elevator Company, 2 and half years for WHO Manufacturing and 24 and half years for the Lamar School District. Later he worked Tony Hall and for his son Guy at A-1 Rental.
To order memorial trees or send flowers to the family in memory of Vernon Walter Carter, please visit our flower store.