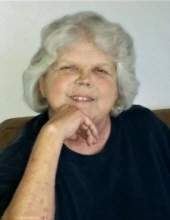 
A celebration of life funeral service for former Holly, CO resident, currently of Las Animas, Velma R. Hill affectionately known to many as “Sis” or “Sissy”, will be held at 10:00 AM Friday January 31, 2020 at the Peacock Family Chapel in Lamar with Wayne Burgess officiating. Burial will follow in the Holly Cemetery in Holly, CO.

Per Sissy’s request there will be no public visitation.

Sissy was born on August 3, 1944 in Holly, CO to Willard Hurley and Ruth Wartman-Hurley and departed this life on Saturday January 25, 2020 at the Bent County Health Care Center in Las Animas with her family by her side at the age of 75.

Velma R. “Sissy” Hill is survived by one son – Troy Hill of Lamar; two granddaughters – Alex Hill and Tamara (Shane) Allenbaugh all of McClave; by three great-grandchildren; and by three siblings – Wilma Jean Ice of Pueblo; Terry (Judy) Whisenand of Holly; and Tom Wartman of Lamar; as well as by numerous nieces, nephews, cousins, other relatives, and many friends.

Those desiring may make memorial contributions to the Bent County Ambulance Service either direct or in care of the funeral home office.
To order memorial trees or send flowers to the family in memory of Velma R. "Sissy" Hill, please visit our flower store.