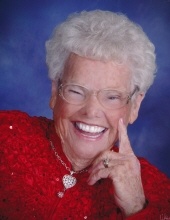 Velda Lavetta Harbert
A celebration of life for longtime Lamar, Colorado resident Velda Lavetta Harbert will be held at 10:00AM on Wednesday, October 18, 2017 at the Lamar Christian Church with Ian Blacker officiating. Interment will follow at the Fairmount Cemetery in Lamar.

Velda Lavetta Harbert was born on December 7, 1920 in La Junta, Colorado to Rose Etta and Frank Smith and passed away on October 13, 2017 in Lamar, Colorado with her family by her side at the age of 96.

From La Junta as an infant she moved with her mom and stepdad to Bristol, Colorado where she attended school as a young girl. From there she moved to Lamar with her mom. Lavetta enjoyed Bristol, as a young girl she often made note that she would never be picked to win the spelling bee’s but she was always picked first to play softball.

On February 17, 1939 Lavetta married Oral B. Harbert at the Springfield Courthouse, it was noted that they went in at noon and the administrator told them to come back after one and he would marry them because it was lunchtime, so they too went and ate and came back after one and got married. To that union four children were born, Patty Ann Sparks, Betty Annette Huber, Gary Oral Harbert and Terry Joe Harbert.

Lavetta is preceded in death by her husband, Oral Harbert, her mom and dad, Rose Etta and Frank Smith, her brother, Robert Lee Smith and her son-in-law, Bill Huber.

To the union of Oral and Lavetta Harbert their children and grandbabies produced one doctor, four teachers and citizens that contribute to the betterment of the USA.