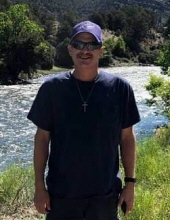 Troy S. Hill
A memorial service for longtime Lamar resident, Troy S. Hill will be held at 1:00PM on Friday, February 26, 2021 at the Hasty Fire Station with Reverend Mike Schneider officiating. Inurnment will follow at the Wiley Cemetery. Services for Troy will be streamed live on the Hasty/McClave Volunteer Fire and Ambulance Service Facebook page.

Per Troy’s request cremation will take place and there will be no visitation.

Troy Shane Hill, son of Charles C. Hill and Velma R. (Hurley) Hill was born on August 22, 1968 in Castle Rock, Colorado and departed this life with his family by his side on February 21, 2021 at his home in Lamar at the age of 52.

Troy enjoyed working his HVAC Career and his most recent place of employment was Fort Lyon. Prior to this he was the lead broiler operator at Lamar Light and Power. He attended the Wiley Community Church and was standing on the end of Apprentice with the Lamar Masonic Lodge #90 A.F. & A.M.. Troy also taught OSHA and AUTOCAD at the Lamar Community College.

Troy was an active member of the Wiley Volunteer Fire Department up until his illness, serving his community for approximately 15 years. During this time he served many positions including Assistant Chief for 6 years.

He is preceded in death by his beloved wife, LuEllyn W. Hill and his parents.

Troy is survived by his children, Alexandra Hill of McClave, CO, Tamara and Shane Allenbaugh of McClave, CO, Jordan Diaz of Montrose, CO and Korrie Figueroa of Pueblo, CO; grandchildren, Kylie, Brooklyn, Payton, Ruby and one future firefighter on the way; and special friend Kylene Smith and family as well as a host of friends.

Services are under the direction of the Peacock Family.
To order memorial trees or send flowers to the family in memory of Troy Shane Hill, please visit our flower store.