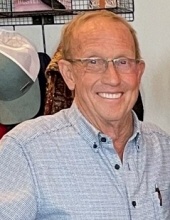 A Service of Celebration will be held for longtime McClave resident Steven R. Wertz at 10:00 AM Tuesday, March 8, 2022 at the Lamar Christian Church with Ian Blacker officiating. Interment will follow at the Union Valley Cemetery in Hasty, Colorado.

Steve is preceded in death by his brothers-in-law Chuck Hawkins, Jim Hawkins and Dave Snyder.

He is survived by his wife Barb of the family home in McClave, children Char (Bryan) Herrera of Lamar, Shelby (Justin) Homm of Wiley and Aaron (Darcie) Wertz of Dumas, TX. Grandchildren: Rylan, Ansley and Reed Herrera, Layton, Emmett, Everly and Charlie Homm and Eli and Jonah Wertz. Steve is also survived by his parents Ivon and Edna Wertz of McClave as well as his siblings Stan (Connie) Wertz of Lamar, Rhonda Snyder of McClave and Brent Wertz also of McClave, his sister-in-law Linda Hawkins of Lamar, brother-in-law Joe (Gail) Hawkins of Orchard, CO and his father and mother-in-law Charles and Betty Hawkins of Lamar. Numerous nieces, nephews other relatives and many friends also survive.

Memorial contributions may be made to the Lamar Christian Church either direct or in care of the funeral home office.

To order memorial trees or send flowers to the family in memory of Steven R. Wertz, please visit our flower store.