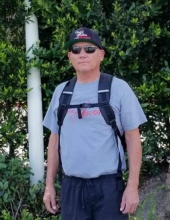 Memorial services for Lamar resident Steven R. Maestas will be held at 10:00 AM, Thursday, April 7, 2022 at the Peacock Family Chapel. Steve’s brother Kenny will officiate the service.

Steve was born on February 24, 1960 at Lamar, Colorado to Arthur Ernest and Frances (Crespin) Maestas and passed away at Memorial Hospital in Colorado Springs on April 2, 2022 at the age of 62.

Memorial Contributions may be made to the Steven R. Maestas Memorial Fund direct or in care of the funeral home office.

To order memorial trees or send flowers to the family in memory of Steven R. Maestas, please visit our flower store.