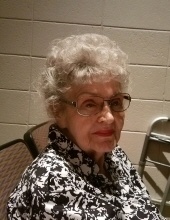 Shirley R. Thom
A memorial service for longtime Lamar resident, Shirley Rae Thom will be held at 10:00AM on Friday, May 28, 2021 at the Peacock Family Chapel with Pastor Michael Stines of the Living Covenant Church officiating. Inurnment will take place at a later date in Spokane, Washington.

Shirley was born on August 7, 1931 at Spokane, Washington to Daniel and Adelaide C. (Erickson) Poffenroth and passed away on May 24, 2021 at the Lamar Estates Nursing Home at the age of 89.

She is preceded in death by her husband, James R. Thom; her parents, Daniel and Adelaide Poffenroth; brother Jack Poffenroth and nephew, Jerry Poffenroth.

Shirley is survived by her daughter, Kathy (Jim) Henderson of Lamar, CO; granddaughters, Rebecca (Matt) Paeth of Longmont, CO and Elizabeth (Jeremiah) Stoker of La Junta, CO; great-grandchildren, Peyton, Parker, Larsen and one on the way; step-grandchildren, Chris (Karen) Henderson of Lamar, CO and Charity (Kevin) Rink of Bristol, CO and numerous step great-grandchildren. She is also survived by her sister-in-law Pat Poffenroth of Edmonds, WA and niece Gail Radke.

Memorial contributions may be made to the Medical Lake High School Music Program in memory of James and Shirley Thom in Medical Lake, Washington in care of the funeral home office.

Services are under the direction of the Peacock Family.
To order memorial trees or send flowers to the family in memory of Shirley R. Thom, please visit our flower store.