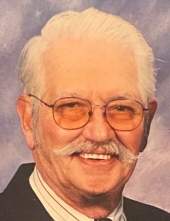 Scott Tidswell
A private family service for former longtime Lamar resident, currently of Colorado Springs, Colorado, will be held at a future date.

He is preceded in death by his wife, Luella in 2007; daughter June Elizabeth (Tidswell) Kretschman in 2001 and his sister Mary McMillin in 2019.

Scott attended public school in Olathe, Kansas, and the University of Kansas. He served in the U.S. Army Infantry during World War II from 1943-1946 as a Staff Sargent in France and Germany. In April 1946 Scott then entered the family business in Lamar and owned and operated Tidswell Furniture until his retirement in 1985. Scott married Luella Elizabeth Reed on October 8, 1950.

While living in Lamar Scott was a member of the Lamar Jaycees, BPOE and the American Legion. He also served on the board of directors for First Federal Savings and Loan in Lamar for 32 years. He was a member of the United Methodist Church in Lamar since 1953 and served as a church usher for many years. Scott also enjoyed volunteering at the Colorado Welcome Center in Lamar. In January of 2017 he moved to the Mount St. Francis Nursing Center in Colorado Springs.

For current information and online condolences please visit our website at www.peacockfuneralhome.com.
To order memorial trees or send flowers to the family in memory of Scott S. Tidswell , please visit our flower store.