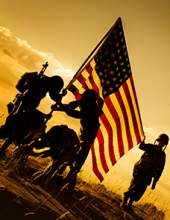 Salvador “Sam” Chavira, Jr.
A Mass of Christian burial for lifelong Lamar resident, Salvador Chavira, Jr., affectionately known to his family and friends as Sam, will be held at 10:00AM on Tuesday, December 11, 2018 at the St. Francis de Sales/Our Lady of Guadalupe Catholic church. A rosary service will be held at the church prior to the mass at 9:30AM with Deacon Allan Medina officiating. Interment with full military honors will follow at Fairmount Cemetery in the veteran’s section under the auspices of the local V.F.W. and American Legion Posts.

Sam is survived by his wife, Betty Chavira of the family home in Lamar, sons, Scott Chavira and Keith (Tonya) Chavira all of Lamar, seven grandchildren, Chelsea, Brandon, Taylor, Nolan, Riley, Keiton and Brock and two great-grandchildren, Sophia and Alec. He is also survived by his siblings, Vicky Jara of Lamar, Rita (Chendo) Magana of Pueblo, CO, Nay Chavira, Ray Chavira and Bea Romero all of Lamar, Julie (Alvin) Robles of Pueblo, CO and Carla (Alfredo) Luna of Louisiana as well as numerous nieces, nephews, other family and a host of friends.

Memorial contributions may be made to the St. Francis de Sales/Our Lady of Guadalupe Catholic Church either direct or in care of the funeral home office.

Services are under the direction of the Peacock Family.
To order memorial trees or send flowers to the family in memory of Salvador "Sam" Chavira, Jr. , please visit our flower store.