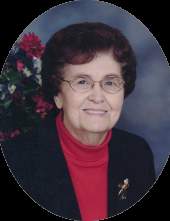 A celebration of life for former longtime Lamar resident currently of Swink, Colorado, Roxie Mae Mourning will be held at 10:00AM on Friday, November 1, 2019 at the Lamar First Baptist Church with Pastor Darren Stroh officiating. Interment will follow at the Fairmount Cemetery in Lamar.

Visitation for Roxie will be held from 1:00PM until 5:00PM on Thursday, October 31, 2019 at the Peacock Family Chapel. Per the family’s request the casket will be closed at the church.

Roxie Mae Mourning was born April 29, 1923 in Emma, Kentucky and departed this life at 96 years and six months of age of October 26, 2019 at Memorial Hospital in Colorado Springs after a short illness.

Roxie moved from Kentucky to Lamar, Colorado with her family when she was a month old. She always considered Lamar her home even after she moved to Swink, CO to be closer to her daughter. Roxie had many good memories of growing up with her parents and six siblings.

Roxie graduated from Lamar Union High School in 1941. After graduation, she worked at Duckwall’s and J.C. Penney’s in Lamar. For a time, she worked at the Russell Stover Candy Factory in Denver, CO. On April 2, 1945 she was united in marriage with Riley C. Mourning in Wichita, KS. Roxie and Riley farmed in the Clover Meadow area until 1964 when they moved into Lamar. They were blessed with two daughters, Kathy and Karen. Roxie stayed at home with her daughters until they were both in school. Roxie then went back to work at J.C. Penney’s until she retired. She was proud that she had worked there long enough to get her Gold Card which entitled her to a lifetime employee discount. Roxie and Riley also had many rentals in Lamar, and Roxie spent many hours cleaning, painting and collecting the rent. After retirement, Roxie volunteered her time at many different places including the Welcome Center and Sandhaven Nursing Home. She was active in the Women’s Circle at the First Baptist Church.

Special thanks to the congregations of the Lamar First Baptist Church and the Swink United Methodist Church for their cards, prayers and fellowship over the last years of Roxie’s life.

Services are under the direction of the Peacock Family.
To order memorial trees or send flowers to the family in memory of Roxie Mae Mourning, please visit our flower store.