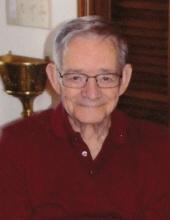 Ronald was born on October 20, 1934 at Farr, Colorado to Frank M. and Theresa (Krist) Fink and passed away on March 31, 2020 at the Prowers Medical Center with his family by his side at the age of 85.

He is preceded in death by his parents and his brother Harold Fink.

Ronald is survived by his wife, Marlene Fink of the family home in Lamar; children, Peggy (Michael) Machone of Lamar; Michelle (Eric) Longdo of Longmont, CO and Darcy (Chad) Williams of Omaha, NE; grandchildren, Joshua and Jacob Machone, Athena Longdo, Sofia, Aiden, Acacia and Ella Williams and great-grandson, Lucas Machone. He is also survived by his siblings, Diane (Ray) Ferris of Walsenburg, CO and Arlene (Roy) Zinanti of Arvada, CO as well as numerous nieces, nephews, other family and a host of friends.

Memorial contributions may be made to the St. Jude’s Children’s Hospital and/or charity of one’s choice either direct or in care of the funeral home office.

Services are under the direction of the Peacock Family.
To order memorial trees or send flowers to the family in memory of Ronald F. Fink, please visit our flower store.