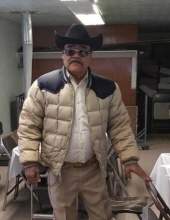 Rogelio was born on February 27, 1942 at Barranco Azul, Chihuahua, Mexico to Erculana Hernandez and passed away on May 9, 2020 at the Denver Hospice at the age of 78.

Memorial contributions may be made to the Rogelio Hernandez Memorial Fund in care of the funeral home office.

For current information and online condolences please visit our website at www.peacockfuneralhome.com. Services will be live-streamed on the Peacock Funeral Home Facebook page on Friday, May 15, 2020 at 2:00PM.
To order memorial trees or send flowers to the family in memory of Rogelio Hernandez , please visit our flower store.