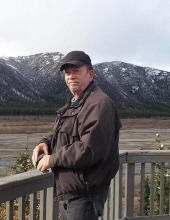 A memorial service with military honors for lifelong Holly and Lamar resident, Roe S. Telfer will be held 10:00AM on Saturday, April 29, 2017 at the Peacock Family Chapel with Pastor Paul Floyd of the High Plains Fellowship Church officiating. Inurnment will be held at a later date at the Holly Cemetery.

Per Roe’s request, cremation has taken place and there will be no public viewing.

He attended Holly High School and was class president of his graduating class of 1967 (this year is the 50 year reunion.) Roe went to Boys State and was active in FFA, achieving several honors. Roe joined the U.S. Air Force in 1970 and was sent to Vietnam for a tour of duty in 1971. He returned following his four-year enlistment in the Air Force to live in the Holly/Lamar area. Roe worked the last 14 years in Lamar, CO at Walmart as a hardware supervisor. His knowledge, kindness and willingness to help everyone, always with a smile, made him popular for requests for his service to the public, especially in the paint department. Roe had an avid thirst for flying. He was self-taught and obtained his private, instrument, and commercial pilot licenses. Roe loved to fly and ride his Goldwing every chance he got. He loved his family and enjoyed spending time with them, giving them rides on both.

He is preceded by his father, one brother Robert Telfer, a sister Jeanette Holvoet as well as his step-father Homer Walker.

Roe is survived by his mother, Dorothy Walker; wife Pam of the family home in Lamar and his children and their spouses; Chris (Robyn) Telfer of Edgewood, NM, Kim (Michelle) Telfer-Reeves of Albuquerque, NM, Angel (David) Bond of Cooper Landing, Alaska, Peggy (Stacey) Rushton of Holly, Kendra (Ben) Avila of Montrose and Danel Converse of Las Animas. Also surviving are 15 grandchildren, 1 great grandchild and his siblings including Jean Telfer of Oregon, Carol (Earl) Hunsucker of Ft. Collins, Janice (Joe) Holvoet of Cedaredge, CO and Sharon (Bobby) Northum of Manor, KS as well as numerous other relatives, a host of friends including his co-workers at Walmart where he has been employed for the last 17 years.

Memorial contributions may be made to the Holly FFA or to the Lamar Area Hospice either direct or in care of the funeral home office.
To order memorial trees or send flowers to the family in memory of Roe S. Telfer, please visit our flower store.