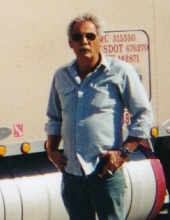 A memorial service for longtime Wiley resident, Robert Pippin, Jr. will be held at 1:00 PM Friday January 12, 2018 at the Peacock Family Chapel in Lamar with Pastor Paul Floyd of the High Plains Fellowship Church will officiate and burial of the ashes will follow in the Wiley Cemetery in Wiley, Colorado.

Per Robert’s request cremation has taken place and there will be no visitation.

Robert Pippin, Jr. affectionately known to many as Bob was born on July 20, 1938 in Tempe, Arizona to Robert Pippin, Sr. and Floy (Brown) Pippin and departed this life on Monday December 11, 2017 at his home near Wiley with his wife by his side at the age of 79.

Bob was preceded in death by his parents and one brother-Jim Pippin.

Bob is survived by his wife Sharon Pippin of Wiley; Children-Robert Lee (Stephanie) Pippin of Prescott Valley, AZ; Edward (Mildred) Pippin of Greeley; Lorna Pippin of Phoenix, AZ and Candy Pippin of Boston, MA; by his step children- Lora (Jerry) Webb of Two Buttes; Lee Chatham and Myles (Brandee) Chatham all of Liberal, KS; by fifteen grandchildren and two great grandchildren; as well as by several nieces, nephews, cousins, other relatives and a host of friends.

Those desiring may make memorial contributions to the Lamar Area Hospice either direct or in care of the funeral home office.
To order memorial trees or send flowers to the family in memory of Robert "Bob" Pippin, Jr., please visit our flower store.