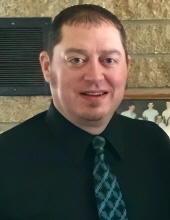 Robert Aaron Brooke
A memorial service for longtime Lamar resident, Robert Aaron Brooke will be held at 2:00PM on Friday, December 17, 2021, at the Peacock Family Chapel with Pastor Mike Schneider of the Wiley Community Church officiating. Inurnment will follow at the Fairmount Cemetery in Lamar.

Robert is survived by his son Braxton Aaron Brooke of Lamar; parents Jay and Francene Brooke of Lamar, sister Candice Brooke and niece Brooke Seib both of Overland Park, KS, mother of Braxton Tara Bailey of Lamar, aunt and uncle Eli and Richard Hess of Wichita, KS as well as numerous family and many friends.

Memorial contributions may be made to the Braxton Brooke College Fund in care of the funeral home office or Braxton Brooke at Fellowship Credit Union.

Services are under the direction of the Peacock Family.
To order memorial trees or send flowers to the family in memory of Robert Aaron Brooke, please visit our flower store.