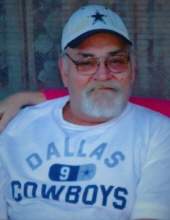 A graveside memorial service for longtime Lamar resident, Richard L. Parker, will be held at 10:30 AM Thursday September 20, 2018 in the Veteran's Section at the Fairmount Cemetery in Lamar. Pastor Paul Floyd of the High Plains Fellowship Church will officiate the service and Full Military Honors will be under the auspices of the local VFW and American Legion.

Per Richard’s request cremation will take place and there will be no public visitation.

Richard L. Parker was born on December 30, 1948 in Englewood, CO to Charles J. Parker and Clara Regina Kappel-Parker and departed this life on Saturday August 25, 2018 at his home in Lamar with his family by his side at the age of 69.

Richard was preceded in death by his parents and by one sister – Charlene Lucerne.

Richard is survived by his wife Vickie Parker of the family home in Lamar; by two children – Tammy (Lee) Lewis of Dacono, CO; and Richard Lee (Kari) Parker Jr. of Billings, MT; by five grandchildren – Cole, Sierra, Curtis, Rylee Ann, and Haylee; as well as by two brothers – Larry (Janet) Parker of Lula, OK and Bob Parker of Florence, CO; and by numerous nieces, and nephews to include – Jon Meyeres and his children – Jobe and Aislynn; and grandniece Tyler Meyeres and a host friends.

Those desiring may make memorial contributions to the Lamar Area Hospice either direct or in care of the funeral home office.
To order memorial trees or send flowers to the family in memory of Richard L. Parker, please visit our flower store.