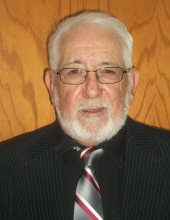 Primotivo “Pete” Jose Gallegos
Longtime Lamar/Granada resident Primotivo “Pete” Jose Gallegos, 83, passed away on March 1, 2021 in Albuquerque, New Mexico.
He was born on June 10, 1937 in Sena, New Mexico to Benito and Eugenia (Nee Martinez) Gallegos. He was the eldest of three children.
Upon relocating to Bristol, Colorado with his parents in his teens, he married Frances “Kika” Granados in 1957. Together they raised five children, Carol “Tykie”, Anthony, Deanna “Dee Dee”, Bryan, and Billy in the Bristol/Granada area.
While in Colorado, Pete was employed as a Hay Mill operator in Bristol and by the City of Lamar until his retirement in 2005.
In April 2000, Pete married Lugarda “Lu” Pacheco of New Mexico. They relocated to Tecolote, New Mexico for the remainder of his retirement years. Pete was actively involved in Calvary Chapel in Las Vegas, New Mexico, where he accepted the Lord as his savior and became a Born Again Christian.
Pete loved sports of all kinds, particularly high school sports during his children’s formative years. It was during this time that he and Kika were affectionately referred as “Mr. and Mrs. Bobcats” by family and friends since they rarely missed any of their children’s sporting events at Granada High School. During the summer months, Pete could often be found at the baseball diamond coaching his boys’ youth baseball teams. He followed Granada sports even after his children graduated from high school and when he moved to New Mexico.
He was a fan of the Denver Broncos, Denver Nuggets and Colorado Rockies, Kansas City Chiefs. He was also a fan of the Colorado Buffaloes and New Mexico Lobos. He never missed an opportunity sit and watch or listen to a game with family and friends.
Pete was an avid bowler in Lamar, competing in local leagues and state tournaments. He also enjoyed playing pool.
Pete was preceded in death by his parents and sister, Carlota “Charlotte” Jimenez.
Pete is survived by his wife, Lu of the family home; a sister, Jenny (Tony) Pacheco of Lamar; two daughters, Carol “Tykie” Gallegos and Dee Dee (TJ) Will-Gallegos, both of Wichita, Kansas; and three sons, Anthony (Penny) Gallegos of San Antonio, Texas, Bryan (Paula) Gallegos of Thornton, Colorado, and Billy (Hope) Gallegos of Denver, Colorado.
He is also survived by four step-daughters, Brenda (Jeff) Garcia of Tecolote, Debbie (Ramon) Cantu of Amarillo, Texas, Theresa (Charles) Rodriguez of Las Vegas, and Betty (Alan) Eddleman of Englewood, Colorado; and one step-son, Walter Raul “Esquibel” of Tecolote.
Surviving Pete are his many grandchildren, step-grandchildren, great grandchildren, great step-grandchildren, cousins, nieces and other relatives and many friends.
Cremation has taken place. Services will be at 10 a.m. on April 17, 2021 at Peacock Funeral Home. Burial will follow at Sunnyslope Cemetery in Bristol.
Arrangements are under the care of Peacock Funeral Home, 209 S. 4th St., Lamar, Colo. 81502
To order memorial trees or send flowers to the family in memory of Primitivo "Pete" Jose Gallegos , please visit our flower store.