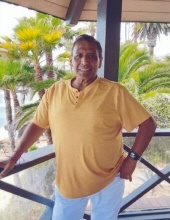 Oscar Rosales Abrego
A mass of Christian burial for longtime Lamar resident, Oscar Rosales Abrego will be held at 10:00AM on Tuesday, January 25, 2022 with Reverend Steven Murray as celebrant. A rosary service will be held prior to the mass at 9:30AM at the church with Maria Elena Gomez reciting. Interment will follow at the Riverside Cemetery.

He is preceded in death by his parents, grandson Jonathan Rosales and sisters Teresa Rosales and Concepcion Rosales.

Services are under the direction of the Peacock Family.
To order memorial trees or send flowers to the family in memory of Oscar Rosales Abrego, please visit our flower store.