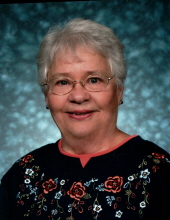 Opal Marlene Miner
Opal Marlene Miner went home to be with Jesus on April 21, 2020, in Amarillo, Texas.
She was born on September 28, 1933 to Ted and Verna (Beeler) Kunzie in the Prairie Queen Community north of Galatia, Colorado and west of Eads. She was the third of eight children. They lived there until she was 5, at which time they moved.
In 1938, they moved to a community south of Kit Carson, Colorado. They lived on a farm southeast of Kit Carson, Colorado until she graduated. Her first job was babysitting the Hogan kids. She worked for a short time in the hardware store in Kit Carson for 65 cents an hour until she graduated in May. Her happiest kid memories were of being free to run around the farm and playing under the mulberry trees.
After she graduated, she married Gerald Miner on July 22, 1951 in Cheyenne Wells, Colorado. To this union were born three children, Suzan Torchia (Jerry) of Guymon, Oklahoma, Scott Miner (Tina) of Perryton, Texas, and David Miner (Patty) of Gruver, Texas.
She loved crocheting, painting, cooking, and playing cards. She also loved her family, and was a homemaker all of her adult life. She was a member of the Trinity Lutheran Church in Kit Carson, Colorado. She lived her final years in Amarillo, Texas where she was close to her kids and grandkids.
She was preceded in death by her husband, Gerald, her parents, and three sisters.
She is survived by her children, two sisters, Rowena Dunn of Levelland, Texas, Sharon Schrayer (LeeRoy) of Omaha, Nebraska, two brothers, Ted A. Kunzie (Marilyn) of Loveland, Colorado, Charles Kunzie (Carla) of Wiggins, Colorado, eight grandchildren, 14 great grandchildren and 1 great great grandchild. Numerous nieces, nephews and friends also survive.
She was loved much and will be missed by all her family.
A private family graveside service will be held at the Kit Carson Cemetery with Pastor Thomas Barton of the Trinity Lutheran Church of Kit Carson officiating. A public Memorial Celebration will be held at the church at a later date.
In lieu of flowers contributions may be made to the Trinity Lutheran Church in care of the funeral home office.
Arrangements are under the direction of the Peacock Funeral Home.
The services for Mrs. Miner will be live-streamed on the Peacock Funeral Home Facebook page at 2:00 PM, Monday, April 27, 2020.
To order memorial trees or send flowers to the family in memory of Opal M. Miner, please visit our flower store.