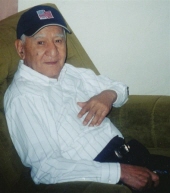 Nick L. Saldana
A Mass of Christian burial for longtime Lamar resident, Nick L. Saldana was held at 2:00 PM Thursday March 17, 2016 at the St. Francis de Sales/Our Lady of Guadalupe Catholic Church in Lamar with Reverend Mariusz Wirkowski as the celebrant.  Burial followed in the Fairmount Cemetery in Lamar.

A rosary service for Nick was held prior to the Mass on Thursday at 1:30PM.

Visitation for Nick Saldana was held from 4:00 PM to 7:00 PM on Wednesday March 16, 2016 at the Peacock Family Chapel and prior to the rosary on Thursday at the Church.

Nick L. Saldana was born on February 9, 1928 in Cimarron, Kansas to Refugio Saldana and Vicenta Torrez Dez – Saldana and departed this life on Saturday March 12, 2016 at the age of 88.

Nick was preceded in death by his parents; by two brothers-Lawrence Saldana and Lonnie Saldana; and by two sisters-Mary Sena and Erma Linda Hernandez.

Those desiring may make memorial contributions to the St. Francis de Sales/Our Lady of Guadalupe Catholic Church either directly or through the funeral home office.
To order memorial trees or send flowers to the family in memory of Nick Saldana, please visit our flower store.