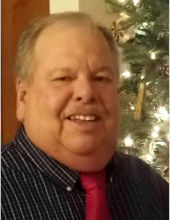 Nicholas “Nick” Harms - Husband, Dad, Grandpa, Old Man, Papa, Pop, Pops, and Daddy….
one of the most gentle, tender hearted, loving, kind, awesome, faithful, devoted, determined, fighters who was tough, strong willed, patient, witty, intelligent, and resourceful. He was a leader of the Harms family and the number one guy that we turned to when looking to navigate lifes road.
A celebration of life for lifelong Cheyenne Wells, Colorado resident, Nick Harms will be held at 10:30AM on Monday, January 4, 2021 at the Grace Lutheran Church in Cheyenne Wells, Colorado. Interment will follow at the Fairview Cemetery in Cheyenne Wells, Colorado.
Per Nick’s request there will not be a visitation.
Nick was born on May 7, 1953 at Cheyenne Wells, Colorado to Melvin and Nellie (Ashley) Harms.
Nick was a devout Lutheran man that instilled a strong faith and work ethic in each of us. He served the church as an elder and Sunday school superintendent. Dad made sure that no matter how tired you were or what event was going on, you were in the third pew, every Sunday morning, except for wheat harvest.
He was a servant leader. Nick served on the volunteer fire department for 31 years and served on the Cheyenne Wells City council. He would not ask a single soul to do anything that he was not willing to do himself. However, if he had shown you once, you better be willing to give it a try the next time.
Nick moved home from college to help his Dad run Cheyenne Farmers which he later bought and ran for many years. He married Theresa (Weber) Harms in September of 1978. To this union they quickly added Nate, Jill, Mike and Robin.
Dad led by example and started teaching us at a young age, as he brought us all to work with him at Cheyenne Farmers Elevator when Mom needed a break. Dad showed his love for life and taught us all patience as he tolerated us kids jumping across the feed sacks, tearing around the yard on the three-wheeler, and keeping his employees from doing their job. Dad was a person that his employees turned to not only as a boss but as friend/mentor. He influenced many and always made sure that anyone he met, felt that they could trust and confide in him.
After selling the elevator, Dad transitioned his life work into farming. He enjoyed planting, tilling, and harvesting with his family. Harvest week was the highlight of the summer as everyone came home and assisted in bringing in the crops. His granddaughters enjoyed coming home and helping prepare the meals for the field while his grandson’s battled for the tractor seat and walkie talkies.
Dad had an engineering mind and loved a challenge. Whether he was fixing an old piece of equipment or was creating something new, he worked by the advice he often gave “work smarter, not harder” and “Use your brain, not your brawn.” Dad and Mike spent many hours at the shop building and welding, while Nate and Dad prepped the equipment, farmed, and repaired. Dad loved his girls and there wasn’t a thing he wouldn’t do to make sure they were happy and taken care of.
When Dad wasn’t at the shop tinkering or coming up with a new invention, he was often found solving the world’s and Bronco’s problems at Hapes Garage, sitting in the living room watching Tom and Jerry with the grandkids, discussing the NFL draft with Grandson Ben on the phone, having water fights on the “Mule” at the shop, traveling to watch the grandkids athletic events, or loading shells for an afternoon of shooting with the family.
As much as Grandpa loved to be told what to do by Grandma, he had a pair of headphones that were always within an arm’s reach. He called these his “Wife Away’s” and was often found wearing them with his feet up on the recliner and Fox News on the TV. Theresa was the love of his life and whole world. He put his life in her hands and there were very few days across their 43 years that they were not side by side.
Nick had many aliments later in life which he faced with courage and strength. He put his trust in the Lord and knew that he would not be dealt anymore than he could handle. Up until the last few days of his life, Dad was still fighting and going to battle to be here for the family. He returned home to the Lord on Wednesday, December 30 on his way home from the hospital in Denver with Theresa at his side.
He is preceded in death by his father Melvin Harms, mother Nellie Harms, brother Jeff Harms, father and mother-in-law Bill and Emily Weber and Connie Weber.
Nick is survived by his wife Theresa Harms of the family home in Cheyenne Wells, CO; children Nathan (Nichole) Harms of Canon City, CO; Jill Harms of Kit Carson, CO; Michael (Angela) Harms of Wray, CO; Robin (Austin) Talbert of Stratton, CO; grandchildren Benjamin, Matthew, Kamryn, Katherine, Cody, Heidi, Kourtney, Avery, Kolbe, Kollin; brother Mark (Diane) Harms of Cheyenne Wells, and multiple nieces and nephews as well as a host of friends.
Memorial contributions may be made to the Grace Lutheran Church of Cheyenne Wells, Colorado either direct or in care of the funeral home office.
Services are under the direction of the Peacock Family.
Services for Nick will be streamed on the Peacock Funeral Home Facebook Page and will be streamed at the Sacred Heart Catholic Church in Cheyenne Wells for overflow seating.
To order memorial trees or send flowers to the family in memory of Nick Harms , please visit our flower store.