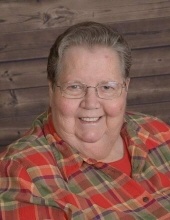 Nadine Carter
A graveside memorial service for lifelong Lamar resident, Verna Nadine Carter, affectionately known as Nadine will be held at 10:00AM on Monday, March 29, 2021 at the Fairmount Cemetery in Lamar with Reverend Dr. Tammy Carter officiating.

Nadine was born on February 7, 1938 at Lamar, Colorado to Harley Lawson and Mary Jane (Barnhart) Steele and passed away on March 12, 2021 in Kansas City, Missouri at the age of 83.

Memorial contributions may be made to the Summit View Church of the Nazarene in Kansas City, Missouri either direct or in care of the funeral home office.

Local services are under the direction of the Peacock Family.
To order memorial trees or send flowers to the family in memory of Nadine Carter , please visit our flower store.