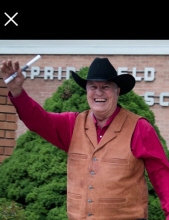 Merlyn L. Noe was the third of eight children born to Sim and Trela Noe on June 15, 1943, at their home in Andrix, CO. He passed away on June 3, 2019 at Parkview Hospital in Pueblo, Colorado due to an injury from an accident.

Merlyn attended the Long Ridge country school for two years, and then started attending school in Kim, Colorado in the third grade. He continued his education in Kim and graduated as salutatorian of his class in 1961. He played basketball, baseball and acted in the Jr. and Sr. plays. Following high school, Merlyn worked for local farmers and ranchers.

In 1962, Merlyn and Donna Konkel went on their first date, which took some persuading on Merlyn’s part! They were married on July 31, 1964, in La Junta, CO. To this happy union was born three ornery sons: Trenton Eugene, Merlyn Zane, Kenan Keith.

After starting their married life living down on Mizer’s ranch, they changed their address many times over the years and worked at various jobs, including farming, ranching, and the State Highway Department. When they moved to the home place at Andrix in 1986, they started raising buffalo and enjoyed doing that for twelve years. They then sold the place and became ‘snow birds’ for seven years. Merlyn and Donna traveled to Arizona for the winter months, and made many good friends along the way and countless memories. When they decided to settle down from their ‘gypsy’ way of life, they lived in Pritchett for three years, and then moved to Springfield, and that is where they stayed.

Merlyn was a wonderful husband, father, and grandfather, and family was of utmost importance. Everyone that knew him knew he had a great sense of humor and a contagious laugh. He loved spending time in the canyons and mountains, and was an excellent tour guide, knowing every nook, cranny, and back road around, He shared his passion for hunting, guns, reloading, and collecting knives. Exploring, jeeping, and camping were favorite pastimes. Through the years, he owned (and sometimes interestingly modified!) every kind of camper known to man. He was always tinkering and came up with a lot of ‘redneck’ ideas. It was literally impossible for him to sit still.

Closes to Merlyn’s heart was his faith and he made the choice to serve God in September of 1969 and continued to do so until his passing.

He was preceded in death by his parents, Sim and Trela Noe; sister Shirley Noe; and his father and mother-in-law, Keith and Enid Konkel.

Funeral services will be held on Saturday, June 8, 2019 at the Kim School Gymnasium at 10:00AM, Jim Price and Jonathan McDonald will be officiating the ceremony.
To order memorial trees or send flowers to the family in memory of Merlyn L. Noe , please visit our flower store.