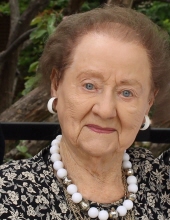 Marie Millicent (Arrowsmith) Kennedy, born August 17, 1924, in Wolverhampton, England, passed away on December 22, 2021, at the age of 97. She is preceded in death by her husband, Clyde B. Kennedy, her parents and her brother, William J. Arrowsmith. Marie is survived by her children, Craig (Ann Turner) Kennedy of Centennial, CO, and Karen Kennedy of Highlands Ranch, CO; grandchildren Shannon (Frank) Straub of Canandaigua, NY, Kimberly (Sam) Cox of Denver, CO, and Melissa (Aaron) Schweid of Aurora, CO, and great-grandchildren Oliver, Nora and Vivian Straub, George Cox, and Aubree, Kinley and Vance Schweid. She is also survived by her sister-in-law Barbara Arrowsmith, nephew Neil (Jayne) Arrowsmith and niece Tina (Martin) Walker all of Wolverhampton, England, as well as many other English relatives and dear friends.

Marie grew up in Wolverhampton, England, attending All Saints’ School, St. Peter’s Collegiate School for Girls, and Queen’s College. Following graduation Marie was employed in the administrative office of James Baker & Sons Boot and Shoe Manufacturer. Marie met the love of her life, Clyde B. Kennedy, at a Servicemen’s dance while he was stationed in Worfield, a small English village outside of Wolverhampton, during World War II. After a few short weeks of courtship, Clyde was transferred to the South of England to prepare for the Normandy Invasion. Clyde and Marie committed to writing each other daily and they have kept the 400 letters to this day. When the European war was won, Clyde traveled back to Wolverhampton where he asked Marie to marry him while sitting on a park bench outside St. George’s Church. They were married on September 26, 1945, in Wolverhampton, England. Clyde returned to Rocky Ford, CO, and Marie joined him five months later. Son Craig was born on July 22, 1947. In 1950 they moved to Granada, CO where Clyde took a new position as assistant cashier at the American State Bank. Daughter Karen was born August 21, 1952.

Living in southeast Colorado for over 70 years, Marie and Clyde became an integral part of the community. Marie became well known by the staff and students while working in the administrative office of Granada School for 22 years from 1968-1990. After retirement, Marie served as secretary for the Southeast Colorado Retired School Employees. Marie attended many school events, and football and basketball games. At just about every function that occurred around Granada, Holly, and Lamar, she and Clyde were there supporting the activities and communities. Just this past year Marie was handing out donuts, as she did every year, at the Granada homecoming bonfire.

Marie and Clyde were honored as Grand Marshals at Lamar Days, the Lamar September 11 parade, and the Fiesta de Colores in Granada. Marie was also an active participant of the Granada Women’s Civic Club, St. Paul’s Episcopal Church, and Granada Senior Citizens. As an active member of the Civic Club since 1950, Marie enjoyed participating in the annual Senior Girls Tea, planting flowers in town, and serving cookies with Santa for the Christmas tree lighting.

Marie and Clyde were ardent travelers to England, Ireland, France, Germany, Belgium, Panama Canal, Hawaii, the Caribbean, and Mexico. Marie and Clyde celebrated their 65th wedding anniversary in England. Marie also celebrated her 94th and 95th birthdays with her family in England. They also visited over 40 of the 50 US states.

At home, Marie was an avid gardener with over 110 spectacular rose bushes. Her favorite roses were the fragrant David Austin varieties of English roses, which originated just eleven miles from her Wolverhampton hometown. Marie loved spending time with her family and especially time with the grandchildren and great-grandchildren, particularly on holidays.

Marie will be missed by all who knew her and most will remember her by her quiet, gentle ways and her lovely British accent. Having lived a long, full 97 years, Marie often marveled at the many changes she had seen and would comment, “What’s the world coming to?” or “You just never know.”

A Celebration of Life for Marie will be held at 10:00 am on Saturday, January 8, 2022, at the Peacock Family Chapel in Lamar, CO, with the Reverend Ian Blacker of the Lamar Christian Church officiating. Interment will follow at the Hillside Cemetery in Granada, CO. Visitation will be held from 2:00-4:00 pm on Friday, January 7, 2022, at the Peacock Family Chapel. Masks are encouraged for those attending services.

Memorial contributions honoring Marie may be made to the Granada Women’s Civic Club and/or Hillside Cemetery Fund either directly or in care of the funeral home office.
To order memorial trees or send flowers to the family in memory of Marie Millicent Kennedy , please visit our flower store.