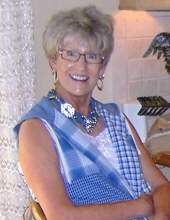 Marie Buhrer
A celebration of life for longtime Lamar resident, Marie Buhrer will be held at 10:00AM on Wednesday, February 27, 2019 at the Lamar First Presbyterian Church with Reverend Rory Gillespie officiating. Interment will follow at the Fairmount Cemetery.

Marie was born on October 25, 1946 at Anthony, Kansas to Lester Donald and Grace Arlene (Stark) Huffman and passed away on February 23, 2019 at her home in Lamar with her family by her side.

Marie is survived by her husband, Dennis Buhrer of the family home in Lamar, daughters, Shelley Hasser of Lamar and Shauna Whitworth of Littleton, CO; grandchildren, Courtney (Matt) Neuhold, Cade Hasser and Sophia Reichert and her great-granddaughter, Mazie Neuhold. She is also survived by her sister, Verena (Steve) Bellesine of Anthony, Kansas as well as numerous nieces, nephews, other family and a host of friends.

My Story: written by Marie Buhrer
My parents were from farm families living in south central Kansas. My dad was in the Army Air Corp and flew fifty missions over Europe during WWII. My worked as a bookkeeper at a local co-op and they met when he returned home after the war. I was born in Anthony, Kansas, on October 25, 1946. By the time I was three, we had moved to Harper, Kansas, then Hutchinson, then to Wichita, Kansas where I was raised. My dad worked at Boeing Aircraft and my mom was a housewife. I have one sister, Verena, who was born in Wichita when I was almost five. As with many siblings, I love her to pieces now, but that wasn’t always the case. Lol! But I always knew that she “had my back”! Mom later went to work as a receptionist at the NBC TV station in Wichita. My parents divorced when I was in high school, but they were each blessed to find second mates who were great people. So I actually had two sets of parents.

I met my husband Dennis, at the end of my sophomore year of high school. I was starting a job at a neighborhood drug store, where a friend of his (Steve) also worked. Dennis, after his first year of college, was visiting Steve that day and my first day of work at the drug store, I arrived looking so bad. It was the last day of school and I had been to an amusement park with girlfriends, had been swimming, and I had to hurry to get to that first day on my new job! Try to imagine – no make-up, frizzy damp hair and sunburned me arriving at the drug store!! Our introduction consisted of Steve saying to Dennis “this is the new fountain girl”. So I was the nameless soda fountain girl. We started dating the next November and married two years later in November of 1964. We celebrated our 50th anniversary on November 14, 2014..

Our older daughter, Shelley, was born in Wichita on March 22, 1967 and younger daughter, Shauna, born in Midland, Texas on October 2, 1970. In January 1968 there were four Air National Guard units called to active duty due to the USS Pueblo being captured by North Korea. McConnell Air Force Base in Wichita was one of those units, one of whose members was Dennis. He wasn’t deployed to Korea or Vietnam as many of the unit members were. He instead had to leave his job at Boeing Air Craft and essentially went to work every day at McConnell A.F.B. in the Motor-pool. He was discharged in September of 1969 and went back to work at Boeing. In March of 1970 we had a situation of entirely mixed feelings. The day he was laid off from Boeing, due to lack of government contacts, was the same day that I found out I was pregnant with baby number two. Hmmmmm, so due to the bad economy in Wichita, a couple of meager jobs were found. Wichita was really suffering as it is known as the Aircraft Capital of the World. Beech craft, Cessna and Lear Jet as well as, of course, Boeing aircraft were all manufactured in Wichita and the economy dictated that planes were simply not being built. All the suppliers and subsidiaries for parts were also affected and there just were no jobs available. After a couple of so-so jobs, Dennis was contacted by his former Boeing supervisor, who had relocated to Midland, Texas. Winecker Aircraft was a new company starting production of small aircraft and they needed draftsmen for the design of a new plane. We moved to Midland with little Shelley, pregnant me and the dog. Unfortunately, due to the poor economy Windecker Aircraft wasn’t able to really get going and sustain itself as a new enterprise. Between 1970 and 1976 we moved from Midland, Texas to Cheyenne Wells, Colorado to Eads, Colorado then to Lamar.
Lamar has been good to us and this is where we raised our family. We have two daughters, Shelley Renee (Michelle) was eight and Shauna Kay was five when we moved here. They both enjoyed school and both participated in sports and other school activities. They have given us three super grand kids. Shelley lives here in Lamar and works for dentist Dr. Jake Mackey – she has daughter Courtney Hasser Neuhold who is married to Matt Neuhold. He’s a wonderful addition to our family and is such a blessing. She’s a Medical Operations Supervisor at the High Plains Clinic. Matt works for UPS and enjoys his work. Shelley’s son Cade Hasser currently works on a fracking rig in North Dakota. Our younger daughter Shauna is a Case Manager for the Jefferson County Social Services. Shauna has a daughter, Sophie who was born August 4, 2011. We were so fortunate to enjoy Shelley’s kids as they grew up because they lived here in Lamar. Shauna lives in Littleton, but we still get to have lots of fun with Sophie. She keeps us on our toes! And then, goodness, Matt and Courtney presented us all with a great-granddaughter, Mazie Renee! She was born on October 7, 2017 and is a very special blessing to us! She’s so sweet and so funny!

Dennis worked for the former Diamond Shamrock Company on a crude oil pipeline, later known as Valero. He retired after working for the company for 33 years. As a Pipeline operator, he essentially was sending crude oil to the refinery in the Texas panhandle. He’s enjoyed restoring classic cars, a motor scooter, and several antique gas pumps. He has a great collection of oil and gas cans, and signs.

I worked as a hairdresser for Barbara Jo Collier for eight years at the Lady Bug Shoppe in the Village Center, then worked another eight years at Neoplan Bus Manufacturer. In 1992 I started work for the City of Lamar in the Fire and Ambulance Service and had a rather strange experience at the beginning. When I interviewed for the job, I’d never been to the Fire Department, didn’t know where it was located, I knew nothing about the place. And yet, when I walked in there I felt a sense of belonging, felt that I was meant to be there. A few days later I received a letter stating that I had not been chosen for the position. I was so let-down, and felt that I’d sure called that one wrong, hmmmm? Then a few days later I got a call from the Fire Chief offering me the job! I’d felt so sure that God would place me there, but maybe God made me wait and be the second choice so I didn’t get the big-head! Ha Ha. After working there for a while I became known as the den mother! I have so much love and respect for them and all they do for our community. I retired nineteen years there. Some of them are as close as family. I really enjoyed my time at the Fire Department.

We’re enjoying retirement and seem to stay busy. Starting this new chapter of retirement has been interesting, as some of you already know.
I’ve had such a good life, better than I even expected! I am so blessed, and of course, my greatest decision and blessing was to ask Jesus into my life!! He is the ultimate blessing!

I’ve been trying to think of people who have been a great influence in my life and I think the greatest influence that we all have is God. I mean where would we be otherwise? We can’t imagine anything else. So, beyond that, I think our parents are the first influence we had, then friends and teachers in school. As I’ve been pondering on the most influential, it keeps coming around to two people. First is an aunt, who lived in Kansas that I was very close to growing up and as an adult, also. The second was first my boss, and then she became my best friend, Barbara Jo Collier. There were similarities between them that I hadn’t really recognized. They were the same age, within about three weeks, for their birthdays. They were each lots of fun, they were generous, talented, kind, loving people who also had a bit of mischief. They were each the ‘glue’ that held their families together. They both loved people, loved entertaining, they were hard workers, they were great cooks, both enjoyed doing crafts, and their families were the core of their lives. I miss them both so much! They have both passed on and I am pretty sure that they are having a great time up there and I’d like to think that they are anxiously awaiting my arrival.


Memorial contributions may be made to Lamar First Presbyterian Church, Lamar Area Hospice and/or Salvation Army either direct or in care of the funeral home office.

Services are under the direction of the Peacock Family.
To order memorial trees or send flowers to the family in memory of Marie Buhrer, please visit our flower store.