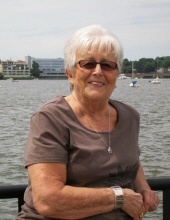 Margaret “Marge” May
A memorial service for longtime Lamar resident, Margaret May, affectionately known as Marge will be held at 2:00PM on Saturday, January 8, 2022 at the Lamar Christian Church with Bon May officiating. A time of fellowship and an Italian meal will follow the services in the Fellowship Hall.

Per Marge’s request cremation will take place and inurnment will be held in early summer in 2022 at the Mount Olivet Cemetery in Middletown, New Jersey


Margaret “Marge” Helen May was born February 22, 1936, in Long Branch, New Jersey. Marge passed away on December 28, 2021, at her home in Lamar, Colorado with her loving family at her side at the age of 85. She was the fifth of six children born to Gaetano and Angela Maria (Avallone) Ferraro. Both her parents immigrated from a village near Naples in southern Italy to New Jersey. Marge grew up in Red Bank, New Jersey. She was known as “Maggie” to her brothers, she said that name was used mostly to aggravate her. Marge graduated from Red Bank Catholic High School in 1953. Her favorite childhood memories were spending her summers at the New Jersey shore and crabbing with her brothers.

Following graduation from high school, Marge worked for Bright Cleaners in Eatontown, New Jersey. While working there in 1961, she met an Army soldier stationed at Fort Monmouth – Larry May. They married in 1962. They spent the beginning of their marriage stationed in Germany. This provided Marge the opportunity to visit Italy. She was able to spend time with her relatives, explore where her parents grew-up, and enjoy her Italian Heritage. After Germany, they initially settled in Trinidad, Colorado. In 1966, they moved to Lamar, Colorado. Marge had three children, Angela, Alexander, and Diana. While her children were young, Marge was a full-time homemaker. As her children got older, Marge worked for Elmer Parks Bookkeeping, Re-2 School District, and in the banking business at the Lamar Industrial Bank and later First National Bank from 1976 until retirement from full time work in 2001. She continued working part-time until fully retiring in 2017 at the age of 81. She remained in Lamar after her divorce, drawn by the births of her grandchildren and her devotion to her growing family.
Marge’s favorite adult memories were returning to New Jersey with her children and grandchildren, visiting the Jersey shore, sharing her childhood memories with her family, cooking with her family, and watching her children, grandchildren and great grandchildren grow up. Her grandchildren and great grandchildren were her greatest joy. She was known to many as “Nanny.”

Marge fought a tireless battle against breast cancer. She was first diagnosed in 2001, a second diagnosis in 2005, and a third, terminal diagnosis in 2017. She was a fighter and endured countless personal and health struggles, while never complaining and never wanting to be a burden on others.

While you may be able to take the girl out of Jersey, you can’t take the Jersey out of the girl! Per Marge’s request cremation has taken place and an additional service will be held in Red Bank, New Jersey in June 2022, followed by inurnment of her ashes at the Mount Olivet Cemetery in Middletown, New Jersey.

While she loves flowers, she asked that donations in lieu of flowers be made to the Susan G. Komen Colorado Breast Cancer or the Lamar Area Hospice organizations in her memory. Links to those organizations are available at www.peacockfuneralhome.com.
To order memorial trees or send flowers to the family in memory of Margaret "Marge" May , please visit our flower store.