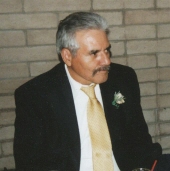 A Mass of Christian Burial was held at 10:00 AM on Wednesday, September 2, 2015for lifetime Lamar resident, Lupe Andrade at St. Francis de Sales/Our Lady of Guadalupe Catholic Church with Reverend Carl Wertin as celebrant. A Rosary Service was held prior to the Mass at 9:30AM. Deacon Alan Medina will recite the rosary prayers also at the church. A Rite of Committal followed the Mass at Fairmount Cemetery in the Veteran’s Section under the auspices of the Lamar V.F.W. Post #3621.

Mr. Andrade was born on March 16, 1929 at Lamar, Colorado to Vincente and Josephina (Melgosa) Andrade and passed away at Penrose Medical Center with his family by his side on August 26, 2015 at the age of 86.

He is survived by his wife, Mary Ann of the family home in Lamar and his children, Estelle (Gary) Pelley of Lamar; Joseph Andrade of Lamar; Susan (Randy) Pierson of Olathe, KS and Greg (Wendy) Andrade of Lamar; twelve grandchildren and three great-grandchildren. He is also survived by his brothers; Jesse (Vickie) Andrade and Eddie Andrade all of Lamar, Vincente Andrade of Granada, Paul Andrade of Denver;  sisters, Gloria (John) Gallegos of Thornton, CO and Mary Montez of Lamar as well as numerous other relatives and friends.
To order memorial trees or send flowers to the family in memory of Lupe Andrade, please visit our flower store.