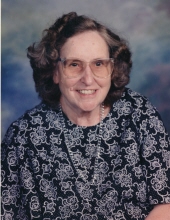 
A graveside memorial service for longtime Lamar resident, LoRee A. Hope, will be held at 10:00 AM, Saturday, March 27, 2021 at the Eads Cemetery in Eads, CO.

LoRee was preceded in death by her husband Charles Hope; parents; one daughter – Dorothy Newman; by two sons – Edward Hope and Kenneth Hope as well as by her siblings – Alta Voshall and Leonard Stevens.

LoRee is survived by two sons – Wesley (Dana) Hope of Waynoka, OK and Frank Hope of Pickens, SC; by eleven grandchildren; fifteen great grandchildren; several other relatives and a host of friends.

The family respectfully requests that in lieu of flowers memorial contributions be made to a charity of one’s choice either direct or in care of the funeral home office.
To order memorial trees or send flowers to the family in memory of LoRee A. Hope, please visit our flower store.