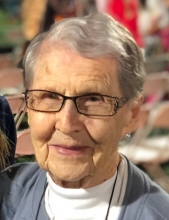 Graveside Memorial Services for former longtime Lamar resident, currently of Mesa, Arizona, Emily Giles will be held at 10:00AM on Saturday, September 21, 2019 at the Fairmount Cemetery with Reverend Kristina Walker officiating.

Emily came to Colorado in 1928 with her parents from Beaver County, Oklahoma. Emily was the second of seven children in the Claybrook family. She resided in Prowers County for 73 years. Emily grew up south of Lamar and attended Riley School.

Emily attended Lamar High School graduating with the class of 1940. She taught at the Pleasant Heights School for one year.

She married Ray L. Giles on May 23, 1940. They celebrated their 63rd anniversary prior to his death.

Emily went to work at the Credit Bureau of Lamar in 1951. She and Ray purchased that business in the late 1950’s. They enjoyed a successful business there until December 1990, at which time they sold the business to Greg and Darla Ronning. Emily was active in the State Associations of Credit Bureau’s, serving in several offices. After retirement they spent their winter in Mesa AZ for about 10 years. Due to Ray’s declining health they moved to Arizona permanently in 2001. During their working years in Lamar they owned a cabin in Canon City that they enjoyed on weekends whenever possible for 18 years.

They were dedicated members of the Lamar United Methodist Church and continued membership there until their deaths.

Emily was a dedicated members of Zonta Club of Prowers for 35 years, serving in various offices.

Emily’s pride and joy was always Maisie’s family and her nieces and nephews many accomplishments. Over the years many trips were taken to Oregon where Maisie’s family resided for over 40 years. Maisie and her husband Don moved to Arizona in 2004 and became a great source of support and encouragement.

She is survived by her daughter Maisie Mankenberg of Mesa, Arizona. Her grandchildren; Kenon (Kirk) Neal of Gilbert, AZ, Stacey Scanlan and Darren Johnson of Boise, ID, Jason (Wendy) Scanlan of Wilsonville, OR, Sue (Craig) Humphrey of Dallas, TX and Ann (Tom) Bassett of California. Also surviving are 12 great grandchildren and her brother Allen Claybrook of Mesa, AZ.

In lieu of flowers memorial contributions may be made to the La Junta Boys Ranch and/or Lamar United Methodist Church either direct or in care of the funeral home office.

Local services are under the direction of the Peacock Family.

For current information and online condolences please visit our website at www.peacockfuneralhome.com.
To order memorial trees or send flowers to the family in memory of Lillian Emily Giles, please visit our flower store.