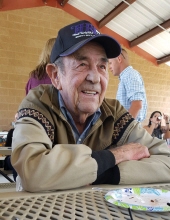 Leonard D. Sniff
A celebration of life memorial service for longtime Eads resident, Leonard D. Sniff was held at 10:00AM on Thursday, February 28, 2019 at the Peacock Family Chapel with Ian Blacker of the Lamar Christian Church officiating.
Visitation for Leonard was held on Wednesday, February 27, 2019 from 3:00PM until 7:00PM at the Peacock Family Chapel. Per Leonard’s request cremation took place following the visitation.
Leonard Doyle Sniff, 84, of Eads, CO, died February 24th 2019, at Weisbrod Memorial Hospital in Eads, CO with his family by his side. He was born October 21st, 1934, in Caddoa, CO to parents Noel and Phila (Brown) Sniff.
With eight brothers and sisters at home, there was a lot to be done to ensure food was on the table. Noel was a cowboy, an original in the mind of Leonard. From that, the story writes itself. From a young age, Leonard could be found outside, working. He learned so much from those Sniff brothers that would stay with him for the rest of his life. Ranching, horses, and working cattle were his favorite past times. What's that saying? "If you do what you love, then you never work a day in your life." That was completely true in Leonard's case. However much he loved being horseback, it couldn't compare to the love he had for his family.
In March of 1955, Leonard married Virginia Miller of Hutchinson, KS. Of this union came two daughters and one son; Monica, Julie, and Dick. Doing ranch chores, riding horses, and brandings were a staple in the family. Later on, after some years had passed, Leonard loved to attend wrestling tournaments, rodeos, baseball games, track meets, and school events. Both for his children and his grandchildren.
Leonard was a character to say the least. He always had a story to share or a memory from another time. His legacy will live on forever, that's for sure. Gone but not forgotten, as they say. Leonard is preceded in death by his parents; sister Gail Skurlock, sister Donna Branom, sister Teresa Tesi, brother Orville Sniff, brother Wallace Sniff, brother Aaron Sniff, and two infant siblings.
Living on with his memory are brother Kenneth (Sue) Sniff of Lafayette, CO, sister Glenna (Jerry) Chandler of Springfield, CO; Virginia Sniff of Tulsa, OK; children Monica Bushnell of Tulsa, OK, Julie (Paul) Oaks of Haskell, OK, and Dick (Diana) Sniff of Wiley, CO; 5 grandchildren, 7 great grandchildren with
Baby Weirich on the way, multiple nephews and nieces, and too many friends to count. Leonard was a well travelled man and never met a stranger.
Memorial contributions may be made to the Prairie Pines Assisted Living in Eads, Colorado and/or Weisbrod Memorial Hospital either direct or in care of the funeral home office.
Services are under the direction of the Peacock Family.
For current information and online condolences please visit our website at www.peacockfuneralhome.com.
To order memorial trees or send flowers to the family in memory of Leonard D. Sniff, please visit our flower store.