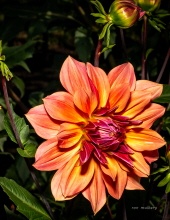 A celebration of life for longtime Lamar resident, Lenore Mulbery will be held at 11:00AM on Thursday, September 23, 2021 at the St. Paul’s Episcopal Church with The Reverend Jennifer Shadle officiating. Inurnment for Lenore has taken place at the Fort Lyon National Cemetery.

Lenore was born November 6, 1923 in Denver, Colorado to Annie Laurie (Sanders) and Harold Doner and passed away on January 30, 2021 at the Lamar Estates Nursing Home in Lamar, Colorado at the age of 97.

Lenore was an only child and she was baptized into the Episcopal faith at Church of the Ascension, Denver. She graduated as one of 11 valedictorians in 1941 from East High School earning a four year full tuition scholarship to the University of Colorado, Boulder. Immediately following graduation in November, 1944, she moved to Lamar and commuted weekdays to Amache Japanese Relocation Center near Granada, where she taught Spanish and English at the high school until the camp closed in 1945.

She met Truman Mulbery on July 31, 1945 right after his discharge from the U.S. Army, having served in the European theater in World War II. They were married September 6, 1945. From this union two sons were born, Ronald and Donald. In 1956 the family moved to a farm just west of Lamar where a city girl took happily to farm life. Over the years they raised chickens, cattle, sheep, horses, pigs and lots of cats. Truman raised hay and feed while also working as a bread foreman at the Marx Bakery, and did custom bailing for neighboring farmers. Lenore learned to bale hay, finishing up the field when he had to go to work at the bakery.

She went to work in 1966 as society editor and columnist at the Lamar Daily News and retired in 1984.

In 1976 she became secretary-treasurer-bookkeeper for Prosperity Lane Water and Sewer Association, a job she held until 2009. Truman passed away May 31, 1996, and she remained on the farm hiring out the farming duties.

She was active in St. Paul’s Episcopal Church where she served on the Altar Guild for 25 years and as United Thank Offering chairman from 1975 on, and as officiant at Morning Prayer services.

She was a member of AARP 3293 from 1983 and served as secretary and president. She enjoyed activities at the Lamar Senior Center including cards, marbles and jam sessions.

Her hobbies included sewing, collection plates and cat memorabilia, collection of salt and pepper shakers, reading and traveling. She enjoyed life to the fullest.

Lenore is preceded in death by her husband, Truman Mulbery, her parents, and nephew, Jake Mulbery.

Memorial contributions may be made to the St. Paul’s Episcopal Church and/or Lamar Area Hospice Respite Care either direct or in care of the funeral home office.

Services are under the direction of the Peacock Family.
To order memorial trees or send flowers to the family in memory of Lenore Mulbery , please visit our flower store.