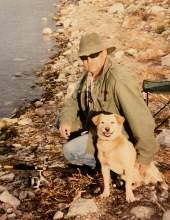 Larry Haskell
A celebration of life memorial service for former Lamar, Colorado resident, currently of Canon City, Colorado, Larry Haskell will be held at 10:00AM on Saturday, June 29, 2019 at the Peacock Family Chapel.

He is preceded in death by his parents, Kenneth and Juanita Haskell and his brother, Wayne Haskell.

Larry is survived by his sons, Johnny Haskell of Jamestown, ND and Kevin Haskell of Denver, CO, two grandchildren and his siblings, Dan Haskell of Indiantown, FL and Brenda Haskell of Canon City, CO as well as numerous nieces, nephews, other family and a host of friends.

Larry was a beloved father and a wonderful person to all who had the pleasure of knowing him. He had a one of a kind personality that he will be remembered by. Larry could be goofy at times and was quite the jokester but he also had a large heart with lots of love for those who knew him best. Larry will be loved and missed every day.

Services are under the direction of the Peacock Family.
To order memorial trees or send flowers to the family in memory of Larry Haskell, please visit our flower store.