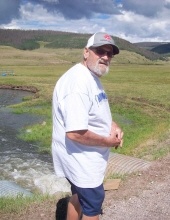 Kirk A. Smith
A memorial service for longtime McClave, Colorado resident Kirk A. Smith will be held at a later date.

Kirk was born on March 16, 1959 at Colorado Springs, Colorado to Stanley Dean and Esther Leone (Clinesmith) Smith and passed away on December 10, 2021 at his home in McClave at the age of 62.

He is preceded in death by his father Stanley Smith.

Kirk is survived by his wife Lesli Smith of the family home; children Troy (Brittany Taylor) Smith of Wiley, Lindsay (Boone) Rider of Belle, MO and Nicole (Josh) Eckert of Lamar; grandchildren Ryan, Connor and Sandra Taylor, Hallie, Wyatt and Cooper Rider and Paizlee and Krislee Eckert and his mother Esther Smith of Colorado Springs, CO. He is also survived by his siblings Rhonda (Ron) Taylor of VA and Chris Smith of Colorado Springs, CO as well nieces, nephews, other family and many friends.

Services are under the direction of the Peacock Family.
To order memorial trees or send flowers to the family in memory of Kirk A. Smith , please visit our flower store.