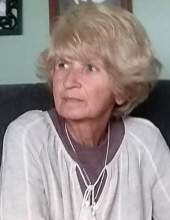 June Cunningham Mauch
Per June’s request cremation will take place and there will be no services.
June was born on December 4, 1944 in California and passed away on April 12, 2019 at the Prowers Medical Center at the age of 74.             She is preceded in death by her sons, Nelson Henson and George Anthony “Tony” Mauch, her parents and her siblings.
June is survived by her longtime companion, Charles Bennett of Lamar, daughters, Kelly Henson of Holly, CO and Erika N. Mauch of Lamar; grandchildren, Ian Sean Mauch of the family home in Lamar, Audrey Mauch and Jason Mauch both of Sunnyvale, CA and Ryan (Misty) Henson of Syracuse, KS and great-grandchildren Jordan and Rylee Phillips. She is also survived by her daughter-in-law, Jessica Mauch of Sunnyvale, CA and her sister, Virginia Lewis of Wichita, KS as well as numerous nieces, nephews, other family and a host of friends.
Arrangements are under the direction of the Peacock Family.
To order memorial trees or send flowers to the family in memory of June Cunningham Mauch , please visit our flower store.