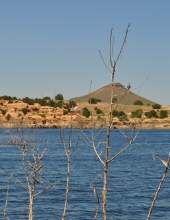 Visitation for June will be held at the Peacock Family Chapel in Lamar on Sunday January 7, 2018 from 1:00 PM to 3:00 PM and prior to the service at the Gymnasium in Two Buttes on Monday.

June was born on April 22, 1931 at Two Buttes, Colorado to Willis Jay and Stella June (Johnson) Allison and passed away on January 4, 2018 at the Southeast Colorado Long Term Care Center in Springfield, Colorado at the age of 86.

She is preceded in death by her husband, Russell Ausmus, her daughter, Terry Lynn Ausmus and her parents.

Memorial contributions may be made to the Two Buttes United Methodist Church either direct or in care of the funeral home office.
To order memorial trees or send flowers to the family in memory of June Ausmus, please visit our flower store.