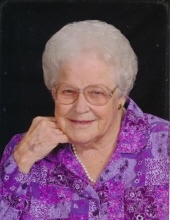 In March of 1935, Juanita was joined by her brother, Jim. Her sister Linetta and brother Dale would follow.

Bob and Juanita lived a short time in the Cedars when Shirley was born until they purchased their home place south of Lamar. She was a room mother at school, square dancing mother, 4-H mother and rodeo mother. Whatever her children were involved with, she was there cheering them on. Juanita supported her children’s and later he grandchildren’s activities and enjoyed many hours spent watching their accomplishments.

She served lunches at Alta Vista and Lincoln Schools and worked for many years at the Lamar Civic Federal Credit Union. Juanita was an avid bowler for many years, a member of the Rebecca Lodge and the Lamar United Methodist Church. She volunteered at Sage nutrition. She truly loved working and being with people. She would play marbles on Tuesday evenings at the Senior Center. She always thrived best when she kept busy.

Juanita is preceded in death by both of her parents, her brother Jim Bickford, her infant sister Vivian, two infant brothers and sister Lynetta Spell of Springfield, CO. Her former spouse Robert D. Bamber, her beloved daughter Shirley Jean (Bamber) Rosengrants and her grandchildren T.J. and Elisha Bamber.

In lieu of flowers memorial contributions may be made to the Lamar United Methodist Church either direct or in care of the funeral home office.

Services are under the direction of the Peacock Family.
To order memorial trees or send flowers to the family in memory of Juanita Bamber , please visit our flower store.