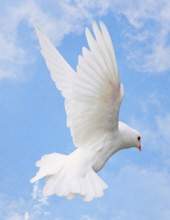 Josephine Martinez
A mass of Christian burial for longtime Granada resident, Josephine Martinez will be held at 10:00AM on Tuesday, October 17, 2017 at the St. Frances of Rome Catholic Church in Holly with Reverend Mariusz Wirkowski as celebrant. A rosary service will be held prior to the mass at the church at 9:30AM with Josie French reciting. Interment will follow at the Hillside Cemetery in Granada.

Visitation for Josephine will be held on Monday, October 16, 2017 from 1:00PM until 7:00PM at the Peacock Family Chapel.

Josephine was born on December 24, 1928 at Lamar, Colorado to Gerardo and Matilda (Salizar) Ortiz and passed away on October 11, 2017 at her home in Granada with her family by her side at the age of 88.

She is preceded in death by her husband, Frank H. Martinez, her sons, Lawrence Martinez and Tony Martinez and her parents.

Services are under the direction of the Peacock Family.
To order memorial trees or send flowers to the family in memory of Josephine Martinez, please visit our flower store.