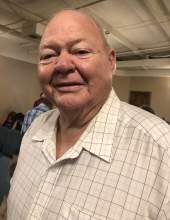 John Dean Bellomy
May 3, 1947 thru Sept 14, 2019
A celebration of life memorial service for longtime Lamar resident, John D. Bellomy, Sr. will be held at 10:00AM on Friday, September 20, 2019 at the Wiley Cemetery with Pastor Mark Viar of the Redeeming Love Church officiating. Military Honors will be held under the auspices of the local V.F.W. and American Legion Posts. A memorial lunch will be held following the graveside services at 12:30PM at the Lamar Christian Church Fellowship Hall.
Per John’s request cremation will take place and there will be no visitation.
John was born in Emporia Kansas, to Herbert Samual Bellomy and Ethel May (Ellis) Bellomy and passed away on September 14, 2019 at his home in Lamar at the age of 72. Herb had served in the Army in the last years of WW II, returned home to his wife and almost 2 year old son Gene living in Vinita, Oklahoma. Herbs first job took him to Emporia Kansas to work on a dairy farm. John was born there in Emporia. While John was very small the family moved to Lamar Colo. Where his dad worked for the Amity Irrigation Co. and lived in a company house on the South side of the Lower Queen Lake. The Clark family was their only neighbors. John’s Brother, Daniel (Dan), was born in Lamar during this time. Brother Gene went to May Valley & Alta Vista schools but before John was in school the family moved to Wichita Kansas. Herbert was a security guard at Boing, later becoming a Sheriff Deputy for Sedgewick Co. Sheriff Office. John’s brother, David and Sister Joyce, were both born in Wichita Kansas during this time. In March of 1962 the family moved back to Holly and then Bristol. John went a short time to Holly high school, and then he completed and graduated from Granada High School. After His Graduation from Granada, John was drafted into the U.S. Army and served in Viet-Nam, In an Artillery Unit, the 39 Arty, of the 4th Division. John was a proud Veteran, proud of his country, The U.S.A. Flag, and a devout Christian.
After Viet-Nam, John married Susan Voight, and they had twins John Jr. and Joanna. After a short time John and Susan divorced, John later married Bernice Mauch, and they had a son Jason. John and Bernice have been married for 43 years. They have 9 Grandchildren, and 7 Great Grand Children.
John became employed with one of the first manufactures that came to Lamar area, Cross Hydraulics. John, Dan and Gene all worked at Cross for some time. John became the Shipping and Receiving Manager for Cross and was involved in the set up of 2 other plants as well. After several years Cross closed its Lamar plant.
John then worked for Wiley Oliver, Including managing the Kawasaki Dealership.
In 1980 Neoplan U.S.A. Corporation, a large Bus Manufacture came to Lamar Colorado and John was hired again as a material manager. He was Inventory Control Manager, then Warehouse Manager including Shipping and Receiving. He later became Purchasing Manager. John had a super ability to remember names and numbers. John retired after 20 years With Neoplan U.S.A. Corp.
At the age of 62 John returned to school at Lamar Community College and attained an Associate’s Degree in Business.
John and Bernice were charter members of the local Christian Motorcycle Association, chapter. It began in Wiley and later was moved to La Junta and is still active. With Brother Gene an active member. John and his wife are also active members of the Redeeming Love Church of Lamar.
John was a friendly and funny guy, always willing to lend a hand and to have a good laugh. I doubt that he ever took a picture with a straight face. He loved to make people laugh, and he loved spending time with family.
In the last days before he passed, he was still being his funny self. In one instance he was being helped to stand at the hospital room, beside his bed, and he was joking and laughing with his nurse. John trusted in the Lord Jesus and now he is laughing and singing and praising him.
Like I used to tell John when we were going to meet at the restaurant for dinner, John—Save me a seat, I will see you there. I never said Good Bye; just I will see you later.
He is preceded in death by his parents; his brother, David Wayne Bellomy and his sister, Joyce Elaine Adams.
John is survived by his wife, Bernice Bellomy of the family home in Lamar; children, John (Amy) Bellomy, Jr. of Penn Valley, CA, Joanna (Tim) May of Bailey, CO and Jason (Emelia) Bellomy of Lamar, CO; grandchildren, Joshua, Jonathan and Genevieve Bellomy; Seth, Kami, Bryce and Kerrigan May; Violet and Dreyden Bellomy and numerous great-grandchildren. He is also survived by his brothers, Gene (Inge) Bellomy and Daniel and Pam Bellomy both of Lamar as well as numerous nieces, nephews, other family and a host of friends.
Memorial contributions may be made to the American Heart Association either direct or in care of the funeral home office.
Services are under the direction of the Peacock Family.

Eulogy by:
Gene Bellomy
To order memorial trees or send flowers to the family in memory of John Dean Bellomy, Sr. , please visit our flower store.