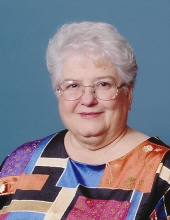 A graveside celebration of life memorial service for Hasty resident formerly of Wiley, JoAnn Burke will be held at 2:00 PM Tuesday January 23, 2018 at the Wiley Cemetery in Wiley, CO with Pastor Travis Walker of the Wiley United Methodist Church officiating.

Per Joann’s request cremation has taken place and there will be no public visitation.

Joann was born on June 3, 1940 in Columbus, Georgia to Simone Edgar Chalkley and Mittie Colwell-Chalkley and departed this life unexpectedly on Wednesday January 17, 2018 at her home in Hasty at the age of 77.

Joann was preceded in death by her parents and by her in-laws – Mattie and Lloyd Burke.

Joann is survived by her husband Arlen Burke of the family home in Hasty; by two sons – Darrell (Geniel) Burke of Greeley; and Lawrence (Rhonda) Burke of Horse Creek, WY; by one daughter – Leigh (Patrick) Esau of Lincoln, NE; by eleven grandchildren; six great grandchildren and by two sisters – Faye Stephenson of Plano, TX; and Dean (Howard) Mason of Evington, VA as well as by numerous other relatives and a host of friends.

Those desiring may make memorial contributions to the Wiley United Methodist Church either directly or through the funeral home office.
To order memorial trees or send flowers to the family in memory of Joann Burke, please visit our flower store.