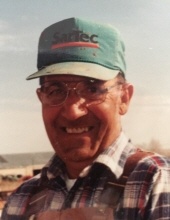 A graveside memorial service for Haxtun, Colorado resident, Jessie Ellwin McVicker will be held at the Wiley Cemetery on Friday, November 9, 2018 at 2:00PM.

Mr. McVicker was born in Lamar, Colorado on April 11, 1933 to John Grant and Evelyn (Thompson) McVicker and passed away at the Haxton Hospital on October 26, 2018 at the age of 85.

He is preceded in death by his parents; his brothers Willis and John McVicker and a granddaughter Skyler.

Arrangements are under the direction of the Peacock Family.
To order memorial trees or send flowers to the family in memory of Jessie Ellwin McVicker, please visit our flower store.