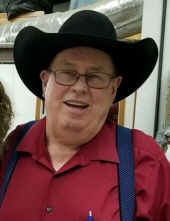 A celebration of life memorial service for longtime Lamar resident formerly of Two Buttes, Jerry Ellis will be held at 2:00PM on Saturday, February 2, 2019 at the First Southern Baptist Church with Pastor Bill Ellis officiating.

Per Jerry’s request cremation will take place and there will be no visitation.

He is preceded in death by his parents and his brothers, Kyle Ellis and Joe Ellis.

Jerry is survived by his wife, Debbie Ellis of the family home in Lamar, children, Chandra (Chris) Alley of Milan, Italy and Shane (Lyndsey) Hunter of Denver, CO; grandchildren, Lilliah, Carson, Isaiah, Caleb and Dominik. He is also survived by his siblings, Bill (Laurie) Ellis of Comanche, TX, Estelle (Steve) Terrell of Willow Park, TX, Oleta (Robert) Giesecke of Houston, TX, Mary Brown and Lena Stringer of Texas as well as numerous nieces, nephews, other family and a host of friends.

Memorial contributions may be made to the First Southern Baptist Church in Lamar either direct or in care of the funeral home office.
To order memorial trees or send flowers to the family in memory of Jerry Lee Ellis, please visit our flower store.