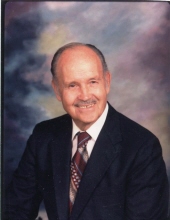 A celebration of life for longtime Lamar resident, James Lyle Brown, affectionately known to many as Brownie, was held at 11:00AM on Saturday March 7, 2015 at the Lamar Presbyterian Church with Pastor Rory Gillespie officiating. Interment followed at the Fairmount Cemetery.

James Lyle Brown was born on August 22, 1915 in Huntsville, Arkansas to J. B. and Sarah Brown and passed away on February 25, 2015 at the Rowan Community Center in Denver at the age of 99.

He is preceded in death by his wife; Norma K. Brown, his parents, sisters; Pearl and Iona Grace and brothers; Robert Earl and Roy Raye.

In lieu of flowers memorial contributions may be made to the Wounded Warrior Project in care of the funeral home office.
To order memorial trees or send flowers to the family in memory of James Lyle Brown, please visit our flower store.