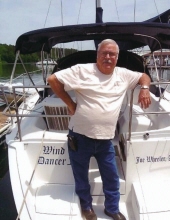 JC Collins
Services for longtime Wiley resident, J C Collins will be held at 1:00PM on Saturday, May 8, 2021 at the Wiley Cemetery.

JC was born December 28, 1949 at Lamar, Colorado to William Otis and Martha Kindness (Brown) Collins and passed away at Prowers Medical Center on January 28, 2021 at the age of 71.

He is preceded in death by his parents and his brother Ivy Collins.

Memorial contributions may be made to St. Jude's Hospital in care of the funeral home office.

Services are under the direction of the Peacock Family.
To order memorial trees or send flowers to the family in memory of J C Collins , please visit our flower store.