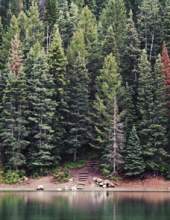 A celebration of life memorial service for Wiley, CO resident, Ignacio Herrera, affectionately known to many as “Nacho” will be held at 11:00 AM Saturday, May 2, 2020 at the Peacock Family Chapel in Lamar with Pastor Paul Floyd officiating. The service will be live streamed on Facebook.com/peacockfuneralhome and we ask the public to join this family on Facebook to comply with safe distancing.

There will be no public visitation.

Nacho was born on May 2, 1958 in Lamar, CO to Manuel Herrera and Alfonsa Hernandez-Herrera and departed this life on Sunday March 22, 2020 at his home in Wiley with his family by his side at the age of 61.

Nacho was preceded in death by his father and one sibling.

Those desiring may make memorial contributions to the Lamar Area Hospice either direct or in care of the funeral home office.
To order memorial trees or send flowers to the family in memory of Ignacio "Nacho" Herrera, please visit our flower store.